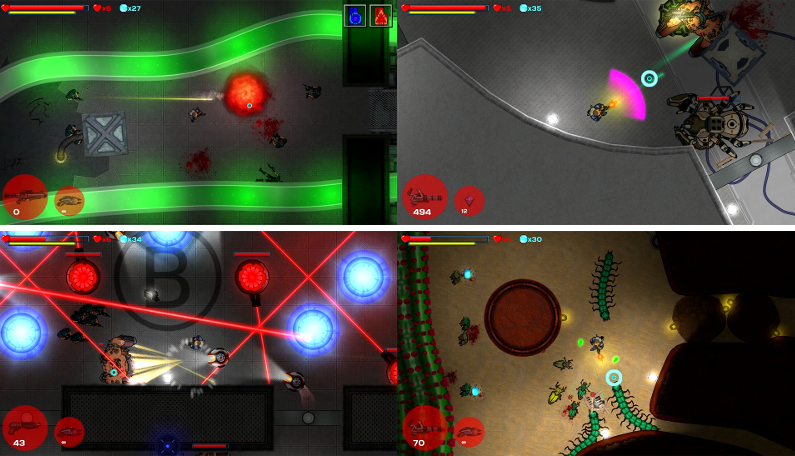 Top-down shoot'em up with gravity gun and physics puzzles

Trigger Time is a story-driven, top-down shoot’em up with a fun gravity gun and physics puzzles to solve. Blast your way through 9 levels filled with enemies, hazards and bizarre bosses. Along the way you’ll take control of vehicles, pick up weapons, items and boosters.

This is 100% full source code for the game. However, due to some legal stuff it’s not possible to publish some of the in-game music here on github. Those music files were replaced by “5 minutes of silence” dummy ogg files. If you want to have the music in game you’ll have to install the game from Steam (for free), locate music files and overwrite those dummy oggs. More on that later in section 6.

Also, by default, Steam is required for the game to run, if you want to run the game without Steam please see section 7 below.

Run it, choose “Add CMake to the system PATH for all users”, accept other defaults.

You’ll need microsoft account, if you don’t have one, create it and use it to download the installer.

Run the installer, accept all defaults (You may uncheck “experience improvement program” however).

Launch visual studio, don’t select “sign in now”, it’s not necessary. Wait for first time setup to complete, you can now exit visual studio if you like.

If everything was done right, you’ll see CMake generating the solution and output:

Build and run the game

Now you can build and run the game in different configurations, i.e. to build in release mode choose “Release” in the topmost combox box and press “ctrl + F5”

Once the game is built you can also run it outside of IDE by simply running “C:\Projects\TriggerTime\build_Win32_VS2013\out\bin\Release\tt.exe”

You can also use other cmake_xxx.sh scripts to generate debug, i386 and steam runtime version of the game.

Originally there was also an android build, but at some point the game became “PC only”. There’re still android makefiles here and there, the game code still contains touchscreen control code, android platform code, etc. So technically, with some effort, one can get the game running on android again… But for now, the build is broken, so you were warned :)

Build for one arch only:

Due to some legal stuff it’s not possible to publish some of the in-game music here on github. Those music files were replaced by “5 minutes of silence” dummy ogg files. If you want to have the music in game you’ll have to:

The game is intended to run from Steam, so if you don’t have Steam opened you’ll see something like this in console:

In order to fix this open config.ini and change steamApiRequired to false.

config.ini has a lot of stuff for developer to use, some of the settings are:

Also, when debugKeys is true you can run the game like this:

i.e. launch some level right away.

This will generate game redistributable package, this includes:

The resulting directory will contain everything to run the game in any environment. Game’s Steam build was also made this way.

Though game itself is free, R.U.B.E is not free, it costs around $35. There’s a demo version on website, but it can only be used for viewing scenes, not saving them.

Most of the resources that have physics (i.e. objects, props, enemies and entire levels) are stored in .rube format in games/res directory, you can open those files using R.U.B.E, modify them and then export to game/assets in json format.

For levels, there’re also lua scripts that are used to drive things like cutscenes, enemy spawn, etc. Lua scripts are in game/assets directory and are named after levels, i.e. e1m4.rube level will export to e1m4.json and will have e1m4.lua level script (which in turn consists of several parts, i.e. e1m4_part0.lua, e1m4_part1.lua, etc.)

A Tempest-clone in JavaScript / HTML5

ArashiJS is a (work-in-progress) Tempest-clone written in JavaScript and HTML5.

A free android game made with Unity3D using C#

SportyKa is a free android game made with Unity3D using C#

Ball Fall is an addictive catch game. Keep your eyes open and your fingers ready.