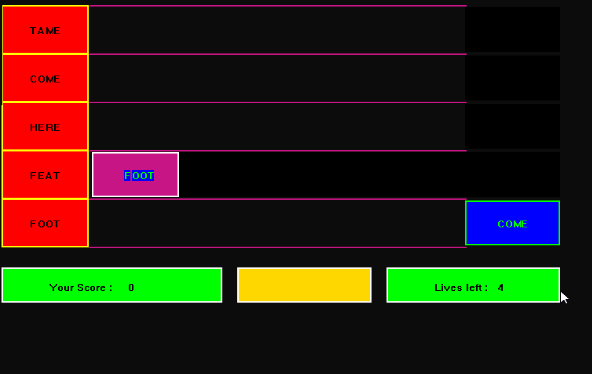 It was made as a final project for my course Introduction to Computing CS101 during my 1st Semester at National University of Computer and Emerging Sciences.

There’s a file named “Typing Tutor.exe”. Just run it and the game will start.

If “Typing Tutor.exe” isn’t working then the game can be compiled using any of the two ways:

Instructions to Play the Game

The rules of my game “Typing Tutor” are :

-- You are provided with a Typing Box . A Box is shown moving vertically on the screen with a word in it.There are five still boxes containing words.

-- If you type the word shown in the moving box , correctly, then the moving box will start to move leftwards otherwise if you have entered an incorrect word in the Typing Box then you will lose one life .

-- When the moving Box collides with a still box (after the moving box has completely moved leftwards) , then if the words in both boxes are same , then your score will increase by one , otherwise you will lose one life.

-- When the word you entered in the Typing Box do no match with that of the word in the Moving Box then your no. of lives will reduce by one .

-- In order to win the game , you need to attain a score of 10 i.e by matching Ten times correctly .

-- You have a total of 5 lives in the beginning and if you lose all your lives i.e when you have 0 lives , then you will lose the game and the game will end.

-- Once you have typed a character in the typing box , it cannot be removed by using BACKSPACE or DELETE key . So be careful while playing ;)

-- There are a total of four levels . Choose which ever level you want to play. Each one is more difficult than previous one.

A Tempest-clone in JavaScript / HTML5

ArashiJS is a (work-in-progress) Tempest-clone written in JavaScript and HTML5.

A free android game made with Unity3D using C#

SportyKa is a free android game made with Unity3D using C#

Ball Fall is an addictive catch game. Keep your eyes open and your fingers ready.

Captain Rogers: Asteroid Belt of Sirius - an HTML5 mobile game made with ImpactJS.